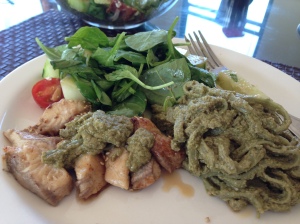 My recent trip to Japan inspired me to make a sesame seed based pesto. Modern Japanese cuisine has a lot of American influences, and one of the dishes prevalent in restaurants, even in 7-11 type of convenient stores, is pasta. However, they often mix Italian-American ingredients with familiar Japanese flavors.  Pesto is traditionally made with basil and pine nuts, but I added a Japanese twist to it by substituting the pine nuts with sesame seeds. The aroma and flavor of the sesame seeds are really powerful, and can do a lot to change the taste of a dish.

Asian culture not only prizes sesame seeds for their taste and aroma, but also for their medicinal properties, especially for the treatment and prevention of hypertension, hyperlipidemia and cancer. Sesame contains two substances, called sesamin and sesamolin, that belong to a group of fibers called lignans. Studies show that lignans have a cholesterol-lowering effect in humans. Sesamin also protects the liver from oxidative damage.

Current scientific studies also demonstrate that sesame oil is a powerful source of antioxidants and has the potential to protect cells from cancer-causing environmental damages. In addition, sesame seeds are a great source of calcium, manganese and iron. See here for more of their nutritional benefits.

A great way to incorporate these amazing super-seeds into your diet is by using them to make a sauce, spread or marinade. You can refer to my pesto entry for more ideas.

Below is my sesame and artichoke pesto recipe:

I often tell my husband that cooking to me is a lot like the practice of medicine (you know, without the saving lives part). In fact, when teaching someone how to perform a medical procedure, I often tell them it is like following a recipe – preparation is key to confident and safe execution. Have all of your ingredients at the ready, go through the recipe in your mind, and then go for it. After you are finished, always ask for feed-back, and think about what went well and what you could have done better.

Yesterday though, my adventures in the kitchen felt more akin to that of a 17th century explorer, boldly going where no man has ever gone before. Thats right, I discovered peanut-sauce! When I was done with this recipe, I knew I had something I could eat salads, wraps, stirfrys, spring-rolls, eggs, and much much more with. This recipe on Season with Spice was my inspiration. Once I was done, I instantly felt like Marco Polo must have felt when he bought the spices of the East to Europe. It was like a whole world of possibilities opened up.

Here are some of the ways I deviated from the recipe: I didn’t have lemon-grass on hand, so I did the logical thing and added Sriracha sauce, hoping the vinegar would be a good enough substitute for the pungent, tangy flavor of lemon-grass. The sweet-salty-creaminess, and spicy kick at the end complimented the asian-inspired meal I had cooked up perfectly.
My husband (who has a nose like a bomb-sniffing dog) took a whiff and said it was too creamy (don’t ask me how he could smell texture), so I added a table-spoon of water. I used chillis freshly picked from the garden since I didn’t have Thai chilli paste or lemons. I omitted the coconut milk, because my sniffer-dog husband would crinkle his nose at me if he smelled coconut in peanut sauce. I used honey instead of sugar and Braggs liquid aminos instead of soy sauce. In other words, I didn’t really follow the recipe.

Recipes aren’t set in stone, though, and if the results are any indication, it’s sometimes just best to wing it. Here are my rough guidelines for making peanut sauce.

Mix together slowly in a small bowl so ingredients don’t splash. Enjoy!